Up In Smoke - Caughlin Fire in Reno, NV.

My parents raised me with three main phrases to live by: "Life isn't fair", "Shit Happens", and "No one owes you anything". Those words of wisdom have helped me be a very self-sustaining person, and I'd like to think they also helped be deal well with bad news.

Friday, November 18th I woke up and loaded Facebook to see a friend's post about his family being evacuated in Reno because of wildfires. I thought it was weird because a) I hadn't heard anything about fires going on, and b) it's mid-November... way past fire season.

About 10 minutes later I checked my email as usual, to find a message from my mom saying that our house was gone. Excuse the language, but my only thought was "...what the fuck?"

Immediately I went to news websites in the Reno area, and it only took a few minutes before I found this image:

That's our house, where I spent much of my childhood growing up (and is still my parents' primary residence). At first I was skeptical and thought to myself, "Nah, that can't be our house. Ours has an upstairs deck on the right side". But it didn't take long to notice the unique ski lift pole that we have holding up that upstairs balcony, and I realized that the balcony was already gone.

Needless to say, it's an ordeal. My step-brother and step-sister live in Reno still, I'm in the San Francisco bay area, my younger brother lives in Los Angeles, and my parents were at their 2nd home in Gettysburg, PA at the time, getting ready to come back to Reno for the holiday season and tax season (they're CPAs).

There's nothing we can do, but I still felt restless sitting at my cafe (office) here at home and watching our house in 40-ft flames on the news. So I closed my laptop, walked home, packed a bag, and hit the road to drive the 3.5 hours to Reno just so I can be there for emotional support. As I rolled into town, it occurred to me that no one even knew I was coming, and my parents were on a plane from PA so I couldn't tell them.

Getting off highway 80, I immediately went up the hill to our neighborhood. Police cars blocked every corner and I was asked a series of questions (and had to show my ID) just to be allowed onto our street. I parked the car and got out to see our front walkway, which now leads to open air and a burned canyon behind it (click photos to enlarge):


This house was unique. Built in 1972 (approx), the first owners were avid skiers. The design of the house reflected that, with a Tahoe-cabin look and even an authentic ski lift pole that supported our upstairs balcony. Everyone's favorite feature, however, was a bridge inside (yes, inside) the front door. As you walked over it, you could look downstairs to our den before descending into the bedroom wing of the house.

My parents divorced when I was 12, and about 18 years ago my step-dad and his kids moved out of their house in Sparks, NV to this one... where it was our first (and only) house as a combined family.


Everyone has their memories of this house. My parents still lived there half the year (and half in PA) as their business is in Reno, my step-sister lived there throughout middle school & high school (and a while after), my step-brother lived there until he was 18 (but still returned often... he was there doing laundry & playing our grand piano the night before it burned), my younger brother moved there when I went to college & lived there until 2004 when he then moved to Nashville, and I lived there during summers, holidays, school breaks, many weekends, and went up periodically to visit when I could get the time off work. We made numerous silly home movies, and I wrote & recorded over 100 goofy songs with my step-brother throughout the years in this house.


The family is doing fine. Some take it harder than others of course, but everyone is safe (which is all that really matters). Numerous police officers, firefighters, gawking neighbors, news cameras, and family members were around all weekend. My parents were interviewed and on the evening news both Sunday and Monday, and they aired an interview with me on Monday night as well.

The property is blocked off as unsafe (the garage could still collapse more) but firefighters are still people too, so on Saturday they looked the other way and let us roam through the debris for an hour or so and just asked us to be really careful. That was a nice gesture, although some yellow caution tape wasn't going to stop me from checking everything out.


Everyone has been super nice and helpful, and my parents have had about 20 invitations to Thanksgiving dinner. The kind boys of Happy Body Slow Brain even offered donations. Bless their hearts, considering they need that money to tour and live off of.

As my mom said, "It's just stuff. We can replace stuff." Of course, some of that "stuff" are things like all of our baby photos, some home movies, family heirlooms (like our grand piano), and even WWII and Civil War relics that my step-dad has collected over the years. Those can't be replaced.


However I offered my take on it, which my family found comforting as well, that at least no one else will get to live in that house. It'll always be our house. When my parents are ready to retire back East, we won't have to watch some new family living in our old rooms. That made me feel a lot better about the whole thing, as selfish as it sounds.

Anyway, we're making the best of it. My favorite moment this weekend was as we stepped through the wreckage, with news vans and cameras around, my step-brother opens the partially-burned mailbox and courteously shouts "...No mail yet!".

Thanks to everyone who has shown their concern. Enjoy (lol) the rest of the photos below, and everyone have a happy Thanksgiving and Holiday Season!

...oh, and take all your photos and home movies, put them on DVDs, and mail them to your relatives. You'll thank me if you're ever in a similar situation.

Posted by Lancaster Photography at 11:59 AM No comments:

I spent the last week and a half on the East coast, mainly to visit my mom and step-dad at their new home in Gettysburg, PA. Both of them are civil war enthusiasts, and we got quite the tour from them around the battlefields. My step-dad is the kind of guy who will drag us through the forest to show us where someone was really killed, proving that the monument 200 yards away was placed in the wrong spot.

The weather was crisp, and there was still a lot of color in the trees. You really miss out on Fall when you live in California (here you get green leaves, brown, or nothing at all).

Not only Civil War buffs, my mom and step-dad are also big into genealogy. Because of their research, I now know that my great, great, great (etc.) grandfather fought in the Civil War at Gettysburg in a regiment from North Carolina. Here is the monument honoring those N. Carolinians:

We took a little side trip to Maryland to browse around, as well as visit "Spook Hill" (a road where if you put your car in neutral it will roll itself uphill). Among our findings was this old stone church: 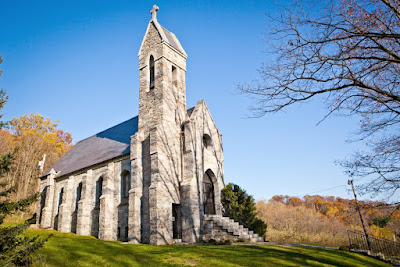 The awesome thing about this church is that I had a Legend of Zelda moment when I went around the back of it. There's a stone opening in the ground with a steep staircase that leads to an old stone room underneath the church: 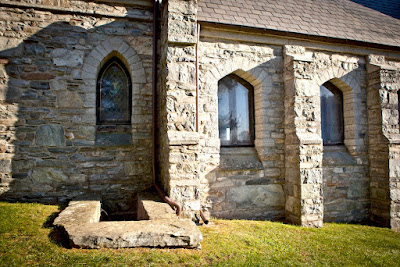 It reminded me of some sort of secret passageway in "A Link to the Past" (the Zelda game on Super Nintendo). Like this one: 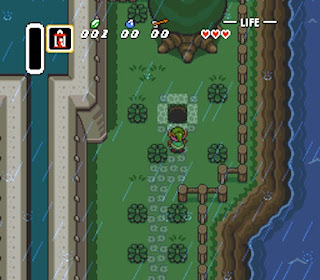 My parents' house is nestled in the woods, about a 2 minute drive from the battlefields of Gettysburg. In fact, the Confederate troops would have marched straight through their property on their way into town. Waking up to a foggy morning in those trees was worth a photo:

After spending a cozy 5 days with them, we left my parents and ventured in to Washington DC. My grandparents lived right near the Pentagon when I was growing up, so I've been there many times. Unfortunately, the last two trips I made to DC (2003, and last September) were both for their funerals. I thought it would be nice to hang out in DC for a happier occasion finally.

It's a short stop off the metro, and thanks to my brother I was able to use the GPS location he sent me to find Grandpa and Grandma so I could say hello to them:

Grandpa was only buried there 2 months ago, so there's still is temporary marker for him while Grandma's name is on the stone. If you didn't see my earlier post, Grandpa retired from the Navy at the rank of Captain, and served in WWII (a Pearl Harbor survivor).

It was an extremely relaxing trip (despite all the walking), and was a bit disappointing to come home to California and be thrown back into the hustle and bustle of regular life. Thanks to my mom and Chip for having us stay with them!

Oh, and I stopped by to say hi to Obama on my way out of town:

As always, all photos by Clay Lancaster. Except the Zelda one.

Posted by Lancaster Photography at 10:07 PM No comments: