We've had a fairly busy last 10 days, and after this evening I should comfortably be able to say that the Paris portion of the film is in the can (which is like 90% of it).

The ending was re-written and a B-story was added. Our first few days were spent re-shooting the ending with our lead actress, as she had another project to get to. I flew from San Francisco to New Jersey, then New Jersey to Paris... hopped on the RER train into Gentilly, met up with everyone here at the studio, had about 30 minutes to get settled, then we started rolling. 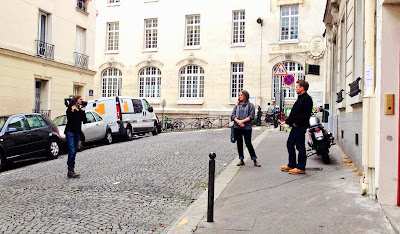 The remainder of the week we worked with our lead actor/writer (as well as a new actress) on the new side story. It was challenging.

A big problem with not having much of a budget is that we have to shoot where we can shoot. That means spending hours on crowded riverbanks - take after take - trying to avoid loud boats, loud people, rain, onlookers, lighting issues, potential security issues, etc.

One of our scenes took about 8 hours to wrap. The scene is only about 5 minutes long.


The majority of our people are now gone, leaving Keith and me here in this art studio on our own. We spent the last day and a half doing some much-needed sleeping in, some pub-drinking, some bicycle riding through the city, some wine drinking, some photography, and some Formula 1 race-watching. After our mini pizzas come out of the oven, we're gonna jump on the Metro with the RED camera and go film some establishing b-roll. Then tonight we pack up, and jet back to San Francisco tomorrow morning.

To my clients who have been patiently waiting on their wedding photos, thank you! I'll have them to you soon.

Enjoy some of these photos, and I'll see you guys back in the States in a couple of days.

Posted by Lancaster Photography at 1:58 AM No comments: