Let's see... I guess I'll start with some wedding shoots and personal-ish news: If I've done photos for your wedding, you've probably met George. He's been my "consistent assistant" for most of them. That is, until a pallet took a wrong turn coming off the loading dock at his day job and crushed his foot, breaking 4 toes.

He's almost back to normal now, and the trooper has hobbled his way through weddings this month like a champ. That even includes an almost 10-hour wedding shoot a few weeks ago. In 95 degree heat. Wearing a plastic boot from the doctor that prevents him from bending his foot.

Suffice to say, my assistant is more badass than your assistant.

Here's the big guy in the ER right after it happened. I spent 3 hours with him, and drove him around to get lunch, medications, etc. 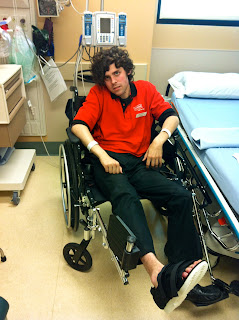 There have been a bunch of fantastic weddings lately. I'm honestly very lucky in the sense that I get to work with some great couples. Couples that will even lovingly call me an asshole during the wedding, because they get my sense of humor. Not to mention that 2012 is apparently the year of TIPS (hint hint). Here are a few of my favorite shots:


Then I shaved. I've had a beard for months and months, so it's a little weird looking so young now: 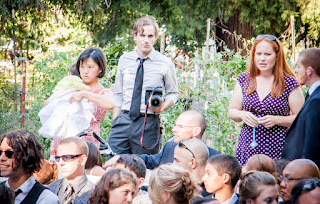 I also did a promo shoot for the very talented Lisa Marie Johnston. It was highly entertaining to have the metal band Testament walk through this particular shot as I was working.

Since we're on the topic of musicians... last week I joined JC of theFIVE10.com for an interview with the band Carolina Liar, and shot their set (currently touring with Kelly Clarkson).


Also, I was (I think for the first time ever) a model. My very dear friend Chelsea wanted to have me sit for her for a project she's working on. She runs Glam Rock Magazine, which I highly suggest you go take a look at.

My brother Keith is currently in Paris studying fashion photography, and someone took a great photo of him. So we did this one to compete (brothers... we always compete).


Oh, and I helped one of my besties Jen (of Calibree Photography) on her shoot with the band Smash Mouth in San Jose, CA. I didn't shoot, but I helped with lighting, and I drank on their tour bus. So I did my part...

And on a personal note: you may have seen my posts about our house burning down last November. This photo is courtesy of my step brother (who I'm very close to), which shows the empty lot after it's been bulldozed. Flowers are already starting to grow. It's kind of peaceful, actually.


That should cover most of it for now. I hope everyone is well. If you've already booked me, get ready for some fun stuff! If you haven't yet... what's the matter with you? :)

-Clay
Posted by Lancaster Photography at 12:35 AM No comments: